Time to get excited about our new collection for Men!

The Beagle has dropped ears, which are also known as Pendant. The unofficial name for this type of ear shape is floppy. The characteristic that makes the Beagle’s ear fall into the category of dropped is that they hang down from the side of the head.
Some wonder if this breed has V-shaped ears, however they do not, as a V-shape comes to a point at the end of the flap (which can be described as an upside down triangle) and Beagle ears are rounded. The front edge slightly turns in toward the cheek.
The leather is not too thick as the ears should be pliable.
You’ll notice this when a Beagle is the passenger in a moving car with the, windows open…The ears will flap in the wind.

Per AKC standards, a Beagle's ears should be long in comparison to the size of the head. If you stand in front of your Beagle and gently take both ears and carefully bring them forward, they should almost reach the tip of the dog’s nose. There are some Beagles with smaller than average ears and this can occur due to poor breeding practices.

This breed is prone to ear infections. Much of this is due to the shape and size of the ears. They fall over the ear canal which blocks air flow. This creates a rather dark, moist environment in which bacteria tends to grow. Careful cleaning can help to prevent these potential problems. Routine cleaning will not completely spare a Beagle from ever experiencing ear problems, yet it will decrease the frequency of infections and other problems such as excess was buildup.

How Often to Clean the Ears

It really depends on how prone a Beagle is to excessive wax buildup and issues with trapped moisture.
If your Beagle tends to develop ear infections, your vet may recommend weekly cleanings.
In general, a cleaning every 2 to 3 weeks can keep a Beagle's ears properly clean. 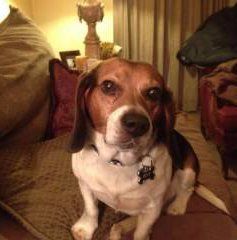 Otis
Photo courtesy of owner Lisa Barrow
It can be helpful to choose a certain time, for example, every other Monday evening for 20 minutes. This way, this grooming task is always done on time and ears stay clean and healthy.
Down below, we'll cover how to clean the ears.

Many problems result from moisture, fleas or ticks. Yet there are other elements to consider as well:
Mites - Mites, in particular, cause problems for the Beagle. Ear Mites are the most widespread type of mite that infests dogs and they are very transmittable, easily spreading from dog to dog or other animal to dog.
These are tiny crab-like parasites that reside in the ear canals of canines, and despite the name, they can also sometimes be found anywhere on the surface of a dog's body. Once there are some on a dog, they reproduce very quickly. With a typical ear mite infection there can be thousands of mites inside of one ear.
When they first attach themselves to a dog, the begin by living on the surface of the dog’s ear canal. It is there that they eat the tiny amounts of skin tissue and ear fluid.
As time goes by, they can travel to the dog’s back, neck and all over the body. They can burrow very deep into the canal. As these tiny parasites bite the skin and feed from blood, it causes swelling and itchiness. Sores often develop and then infection can set in.
Bacteria and Yeast – Infection can be a bacterial in nature or it can be a fungi based issue. Both types thrive in dark, warm, moist areas. Sometimes it is foreign objects caught inside of the dog's ear or cleaning too deeply that can be the cause of infection.
Excess Water – Similar to human’s “swimmer’s ear”, water can become trapped in the dog’s ear canal after swimming and this can lead to infection.
Excess Wax – Some wax is necessary. It works to trap very fine particles, dust and debris that would otherwise travel deeper into the ear canal. However, too much wax can cause blockage in what is an already difficult area that does not receive much air circulation.
Symptoms of Mites
Sometimes, Ear Hematoma can occur. This is when a pocket of blood develops between the layers of the ear cartilage and skin. It is often caused when a dog shakes his head and whips his ears due to ear mites.
Ear Mange may occur, which is the term to describe the redness and crustiness that can develops due to this.
Diagnosing - Some of the signs are similar to yeast infection and other ear problems, therefore the vet will make the diagnosis by using a lighted otoscope tool that allows him to see these miniature mites. The light that emits from this tool actually causes the mites to move out of the wax.
Treatment - The first step is for the veterinarian to clean out your Beagle’s ears. The next step is for medication to be applied. Once this is performed by the veterinarian, most owners will need to clean the ears and apply the medication at home, as well.
Because ear mites are extremely contagious, all other pets (any type) should be examined and treated at the same time.
Prevention - It can help to thoroughly dry your Beagle’s ears after baths and to always check for foreign matter in the ears. Taking your Beagle to the vet as soon as you suspect mites is the best course of action for a speedy recovery.

Even with cleaning, problems can develop. It is important to know the signs of infection in order to obtain treatment as soon as possible. Many infections will continue to worsen until treated with proper medication. Let’s look at the most common signs of infection:

If infection is suspected, your Beagle should be brought to the veterinarian. The vet will look into the canal and testing will be performed to diagnosis the exact issue. In many cases a swab is used to obtain a sample from the canal which is then examined under a microscope to determine the cause. The ears may be flushed at the office.
Treatment may include: Antibiotics, topical ointments and medicated drops. Often, this will clear up within a week or two.

Some Beagles have chronic ear problems that keep coming back as soon as the medication is gone and with some, medication never fully fixes the infection. At this point, extensive testing must be done to find the cause of the reoccurring issue.
It is important to find the cause because a lot of ear infections can cause scarring inside the dog's ear and lead to even more serious health concerns. As long a Beagle keeps suffering with infections, scarring will increase and lead to even more problems. Several steps should be performed:
1. A sample of the ear discharge should be examined to identify the exact type of bacteria or virus.
2. Owners must regularly perform ear washings at home, once a week as described below
3. Testing may show that the infections are being caused by allergies. This is the #1 reason for reoccurring infections. Once the cause of the allergy is determined ...prognosis is good.
Pseudomonas - Pseudomonas aeruginosa is one possible reason that a Beagle will have infections that seemingly keep coming back, however with this, bacteria was actually never fully eradicated. It is a very rare type of bacteria that is hard to kill off. When this type of infection is present, this is the remaining bacteria that stays alive after others have been destroyed with antibiotics. This is strain that is strong and resistant to treatment.
When a swab is taken of the Beagle's ear wax, an examination will show if it is indeed Pseudomonas. This will also show if this strain can be eliminated by the very powerful antibiotics of Enrofloxacin or Orbifloxacin. In addition, frequently a topical treatment will be given to use at home.
Surgery - If the cause of the reoccurring infections cannot be determined and medication does not produce results, one final option may be surgery. A specialist will surgically open the vertical canal. The ear is then easily and completely cleaned out and treated.
Scarring - Chronic ear infections can cause a dog's ear canal to become very scarred. This scarring can become so immense that the canal becomes almost closed. If so, a procedure called Ablation is the final option and only done in the most severe cases with Beagles in which no cause can be determined and medication offers no relief The entire ear canal is removed. Healthy tissue then re-grows in its place. A specialist will do this and this is usually expensive. Most Beagles do very well after this surgery and most will never experience infections again. 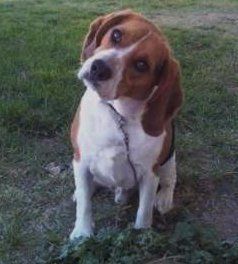 How to Clean a Beagle's Ears

Some owners hesitate to clean the ears because they are worried about causing damage to the fragile ear canal. However, cleaning is relatively easy and after a few times, it becomes a normal part of routine grooming and care.
What you will need:
We really like:
Top Performance Professional Ear Powder

It's easy to use, very safe and very effective.
1. To clean a Beagle’s ears, have your cleanser and cotton balls or gauze within arm’s reach. Lift the flap and squirt the cleanser into the canal (be sure to read the directions of the particular solution that you have obtained).
2. Bring the flap down and massage the base of the ear. This should be done for 1 full minute.
3. Many Beagles will shake their head after the massage is done and this is just fine.
4. Lift the flap again. Using a clean cotton ball or sterilized cotton gauze pads, wipe all areas that are visible to you.
Note – It is not necessary to use a cotton swab to clean into the canal. The solution works to loosen wax and other debris, bringing it to the outer ear where it can be wiped away.
Sticking a swab into a Beagle’s ear can push the wax down further and/or cause injury to this fragile area. If you suspect that there is excess wax deep inside, as with the other symptoms and signs listed above, this should be examined by an experienced and reputable veterinarian.

Comments will be approved before showing up.

Who's Beagle on The Masked Dancer? True identification revealed - SPOILER!

Who's Beagle on The Masked Dancer? Their true identification has been formally confirmed within the newest episode!

The model new collection of The Masked Dancer UK is presently airing all this week on ITV.

A beagle named Purin has formally achieved the brand new document for essentially the most balls caught by a canine with the entrance paws in a single minute, surpassing her personal earlier document from 2014.

Be the first to know about upcoming sales and promos. Get a 10% discount coupon when you subscribe!

Get a sneak peek on upcoming promos and get special discounts.